Choose the right cut of beef for the meal 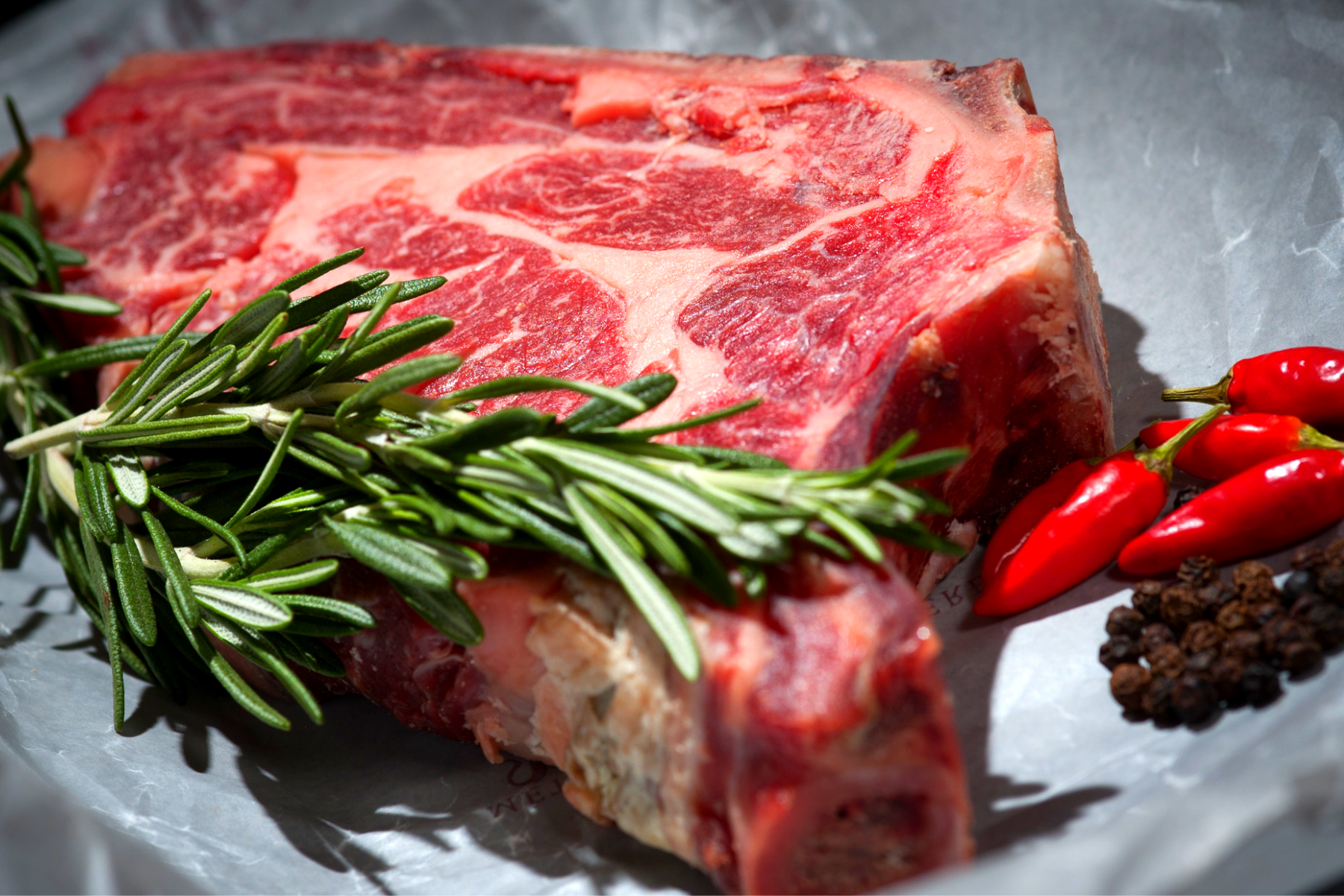 How many times have you stood in confusion staring at the piece of meat you just picked up for dinner wondering, “What am I meant to do with this?!”

An easy guide to surprise and satisfy even the most selective eaters in the family, as well as to take the drama out of dinner time.

Why treat each beef cut differently?

Different cuts of meat should be cooked differently. You don’t want to just take a beautiful tenderloin steak and blast the red out of it as you would for ground beef hamburgers, right?! This is because as you will read below, different cuts come from different parts of the animal and each has its own unique mix of fat, meat, and flavour. Each part of the animal has served a different purpose in its lifetime and needs to be treated appropriately.

Whether to marinate or not, whether to sear, slow cook, roast, grill, pan fry, casserole, braise, stir fry or something else completely! Keep reading to learn more about how to choose the right cut of beef for the meal.

The Main Cuts of Meat

There are 8 main cuts of beef, the Primal Cuts as they are called. These then get butchered down to sub-primal, and portion cuts. Portion cuts are usually what you see where you buy your meat.

Chuck meat comes from the shoulder of the animal. It is an inexpensive, rich, flavourful cut which is very versatile. The shoulder is a complicated mechanism which means this area has lots of tendon and sinew holding everything together. The chuck primal section features a variety of cuts including flatiron steak, ground beef, chuck short ribs, blade steak, 7-bone steak, and chuck roast among others. It can be tough and chewy when cooked incorrectly but responds well to slow cooking and braising. Great for making casseroles, one-pot stew, and especially Beef Bourguignon.

The ribs themselves are situated under the front section of the backbone and used primarily for support. The Rib primal section is made up of the animal’s ribs and backbone.  Popular cuts from the Rib include the rich, flavourful Ribeye Steak and the Prime Rib Roast. Ribeyes can be bone-in or boneless, with boneless cuts generally being more expensive per pound. Also from this area comes the rack of ribs, another version of short ribs, ribeye cap steak and ribeye fillet. Ribeye steak cooks up beautifully in a hot skillet with herb butter while Prime rib roast is a great Sunday roast cut, cooked rare and served with vegetables, Yorkshire pudding and gravy.

The loin has two parts: short-loin and sirloin. The short loin is the front part of the loin primal cut, whereas the sirloin is the back. The loins are the sides of the animal between the lower ribs and pelvis, and the lower part of the back. As this section of muscles is not used as much as others, the meat from here is very tender and tends to be more expensive as a result. Popular cuts from the short-loin are filet mignon, tenderloin steak, T-bone, Porterhouse steaks, strip steak, and New York steak. Common cuts from the sirloin area are sirloin steak, top sirloin, bottom sirloin, and a tri-tip roast. Loin steaks are made for grilling and go down well at any bbq. 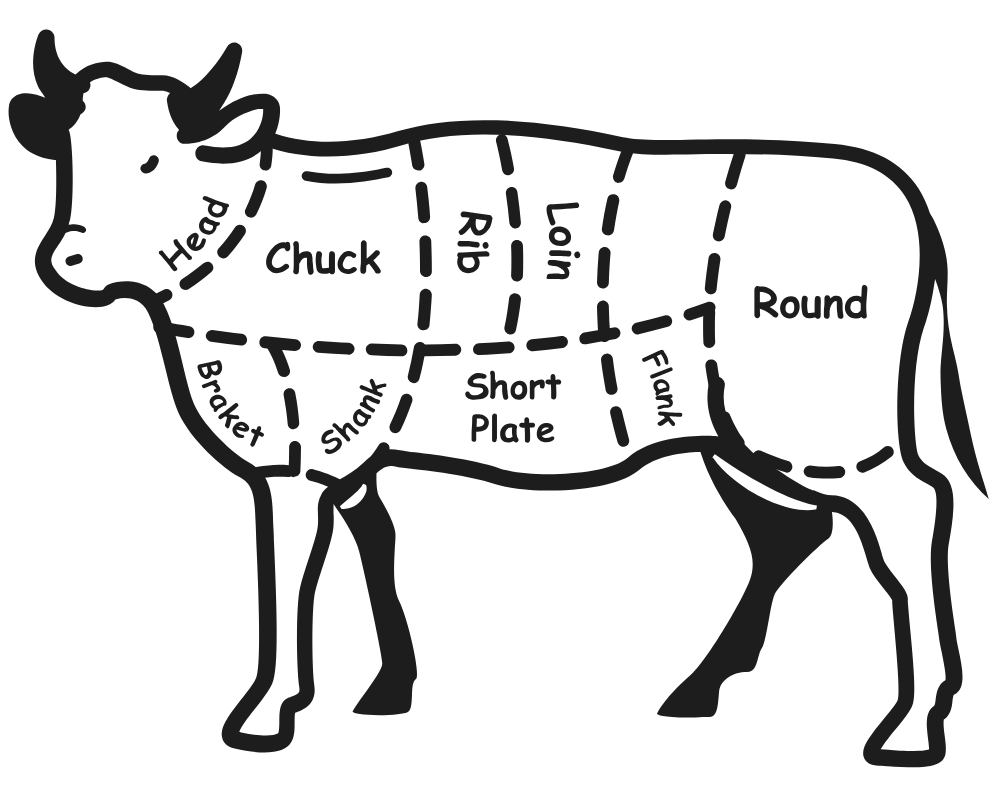 The beef round is another large primal cut made up mainly of the rear leg and rump of the animal. These muscles do a lot of work so this section can be tough and lean. This makes it a good option for slow cooking. Round is relatively inexpensive and is seen a lot in the meat section especially as ground beef. Common cuts include round steak, the eye of round, tip steak, tip roast, top round and bottom round roasts. The Round cuts benefit from cooking with liquid like a casserole or braising in stock, butter, or sauce to keep it tender.

The flank is located below the loin, taken from the abdominal muscles or lower chest of the animal. It is boneless and is very flavourful but also quite tough.

Meat from the Flank is best sliced against the grain before serving, to maximize tenderness. It can be marinated once sliced and goes great in stir-fries and Asian inspired meals.

The short plate, also known simply as The Plate, is where you can find another kind of short ribs. As a fattier part of the animal, meat from the short plate gives us hangar steak as well as skirt steak which is usually used in Fajitas and other Mexican meals.

Brisket is a cut of meat from the breast of beef. It includes the chest muscles and can be tough and fatty. Brisket is defined by two cuts, flat brisket or brisket point.

Slow cook these cuts to have them melt in your mouth. Make sure to use a seasoning rub and baste the meat while cooking to keep it moist. The slower the better!

The beef shank is the leg portion of the animal. These muscles are constantly being used as the animal moves around which makes the shank dry, tough, and sinewy. It is very cheap to purchase though and can be used for rich and flavourful gravies, soup stock,  or as osso buco with bone-in.

No matter what you feel like cooking, hopefully, this gives you the confidence on how to choose the right cut of beef for the meal. If you need more information, send us a message or come on down to the shop, 24/8 Moona Creek Road, Vincentia 2540, the team here at Jervis Bay Meat Company would be happy to answer any questions you may have.